In a landmark development, Australia’s principal energy rule-maker has paved the way for network operators to sever the network ties to remote customers, and deliver stand-alone power systems based around solar and batteries that will deliver big savings to all consumers.

The supply of electricity to remote and rural areas, via some 900,000 of kilometres of poles and wires under schemes such as the original rural electrification programs, was an important but immensely costly exercise to deliver electricity to as many people as possible.

It involves huge cross-subsidies paid by consumers in more heavily populated areas, and while networks and stand-alone power suppliers have acknowledged that off-grid supplies would be a cheaper, cleaner and more reliable solution for some time now, the archaic rules of Australia’s electricity market did not allow it.

That may finally change following a review and recommendations from the Australian Energy Market Commission, which says cutting hundreds or even thousands of kilometres of poles and wires and replacing them with stand-alone systems featuring a mixture of solar, batteries and diesel back-up would be both cheaper and cleaner.

And, the AEMC says, it would also be safer and more reliable, because of the reduced impact of storms, bushfires, floods and the like.

The AEMC has had a look at the issue previously, but rejected a Western Power application in 2017, mostly due to legal technicalities. But it asked the COAG energy council to ask it (the AEMC) to perform a review of the law and to recommend changes (that’s the way things work in this country), and this is the result.

It’s a significant change. It is a further tangible breakdown of the old centralised energy system that held that supplies should be centralised and networks extensively.

That worked for the fossil fuel industry, but the emergence of solar, storage, smart management systems and other distributed energy resources – and the transition of the consumer to a pro-super that can supply some or even all of their own power – as individuals or as groups and communities – is hugely significant.

The AEMC says its feedback to date has been the most overwhelmingly positive it has ever received, a sign of the pent-up frustration over the issue from networks, system providers, customers and local government, and the opportunities that new technology presents. 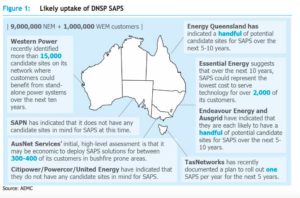 AEMC chief executive Anne Pearson told RenewEconomy in an interview on Wednesday that while the numbers of customers identified for “transition” to stand alone systems by local networks over the next•10 years is “relatively low” – see graph above – the potential savings – because of the extreme cost of connecting and maintaining poles and wires – would still deliver “significant cost savings” across the board.

In Queensland, the numbers total several hundred (probably because there is already more stand-alone power systems), while South Australia surprisingly did not identify any. But the report may only scratch the surface.

These systems can range in size to supplying a single bore pump to a micro-grid covering a whole town. And it is highly likely, RenewEconomy believes, that given the falling cost of solar and storage and rapid improvements in management systems, that the number of consumers that could benefit from the stand-alone system would be far greater than imagined here.

One study in 2016, for example, pointed to some 40 mid-sized towns – some not on the edge of grid at all – that could benefit from cost reductions if they cut the cord to the central grid and had their own renewables-based micro-grid.

That might be too much, however, for the incumbent utilities to contemplate, even if Western Power envisages a “modular” grid where many of its consumers operate on a stand-alone system, and some with only a “thin” connection.

Two years ago, Western Power argued that it could save $400 million through such a scheme. “This is as close to a ‘no brainer’ as we can get,” said Andrew Dillon, the then interim, and now current CEO of Energy Networks Australia, which teamed up with the Alternative Energy Association and the Public Interest Advocacy Centre to try to encourage regulators to come to the party. 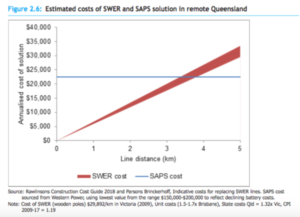 In Queensland, the networks estimate that stand-alone power systems are more economical when replacing poles and wires of more than 4kms per customer.

Essential in NSW says that it costs up to $25,000 per customer, per year, to clear vegetation in some areas, and it also notes that one 1,905km line serves just 335 customers. Just imagine how many lines service less than one customer for every km.

“We know there are some sites ready to go,” Pearson says, “these are the poles and the kilometres of the wires that we don’t need, because of high costs or safety issues. We can make this happen.”

Actually, there is still a bit of legal and policy work to do. The rules need to be okayed by the COAG energy council and then go through the laborious process of actually being changed, but it could all be in place by early next year. In the traditionally glacial pace of regulatory change in Australia, this is a fast-flowing river.

And it may not stop there. A second leg of the project will look at helping new communities, such as housing divisions, which do not want to connect to the grid in the first place, again in recognition of the plunging cost of both solar and battery storage.

The AEMC report notes that battery costs fell globally by 40 per cent in recent years, but by 73 per cent in Australia over the same time. And capital costs for a fully installed residential storage system are expected to fall by another 58 per cent by 2030.

“We are seeing the cost of these technologies drop and drop and drop,” Pearson says. “This is a great way to take advantage of what technology can provide as costs come down.

“This has been a really great project for us on so many levels,” Pearson says. “We can improve outcomes for remote customers, who have been suffering from poor reliability outcomes and high costs.

“It promotes DER, and our people have really relished working on this program. It’s been both creative and productive, they have visited various communities, it’s great for them to see the technologies at work. We hope that COAG makes it a priority and makes the necessary changes to the law as soon as possible.”

Essential Energy put the potential savings from its identified 2,000 or so customers at more than $220 million. But the system-wide savings could be in the billions.

W.A consumers were subsidised to the tune of $600 million, much of it to remote and regional customers, before the government wound it back after deciding the budget couldn’t afford it. In Queensland, the bill to ensure a universal price for all consumers – be there in the city or the country or at the end of the grid – remains at around $600 million a year, although the cost is less visible in other states.

Various trials have shown that stand-alone power systems are much cheaper, up to 15 times more reliable, and much safer. Horizon, in regional W.A. and not subject to the same rules, recently took 14 customers off the grid and removed 54kms of poles and wires.

The one complication is the so-called “ring fencing” rules that mean that the network owners cannot be generators, so unless they can get a waiver they will have to find a third party, or a subsidiary, to provide the generation (the solar and battery and back-up).

That leads to another question about whether Australia’s electricity market is hamstrung by vertical integration (generators and retailers on one hand, and network providers on the other), that serves it poorly, but we’ll leave that for another day.

The Great Smogs of London & China

What would Australia look like powered by 100% renewable energy?