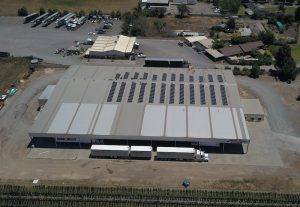 A fruit grower in Victoria’s Goulburn Valley has cut its grid power consumption by one-third, and its annual electricity costs by a whopping $62k a year with solar – 200kW of solar across the rooftops of its storage sheds.

The two 100kW solar PV systems have been installed at the Central Park Orchards and Mountain Valley Produce Centre of the Rachele Group – a third generation pear and stone fruit farming family business.

The Rachele family turned to solar to manage the farm’s energy costs, which they said had been increasing steadily over five years. 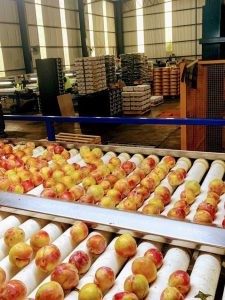 Out of control power costs

The 300-acre farming operation, near Shepparton, has been growing, packing and transporting pears, nectarines, plums and peaches to supermarket shelves for more than 50 years, but co-owner Matthew Rachele said the time had come to take action on “out of control” power costs.

“We pick our fruit and then we have to pull it down to zero degrees immediately,” he said. “This refrigeration takes a lot of energy, it’s the most energy-intensive part of our operations.

“The last couple of years, in particular, our energy costs were out of control. We knew we needed to be more efficient. If we weren’t being efficient we were going backwards.”

The family engaged Australian energy services business Verdia to investigate technical solutions and provide funding via the Clean Energy Finance Corporation’s backed Westpac Energy Efficiency Program – something it has been doing in partnership with the big four banks since 2016.

Verdia managed the quoting process, including detailed assessments of three retailers, and all aspects of the installation, connection and commissioning of the systems.

Verdia CEO Paul Peters said the initial capital investment in the solar system would pay itself off in five years and earn an additional $1.07 million in benefits over the life of the assets.

As noted above, the two systems will reduce on-site electricity use by about 30 percent, saving the business more than $62,000 a year in electricity costs. Excess energy produced during non-peak farming periods will be sent back to the grid, earning a small feed-in tariff.

“We selected the best of three proposals from our suppliers to install two separate 100 kilowatt systems on the farm’s cold storage sheds,” Peters said.

“Together they will help cut their energy use by around 30 percent which translates to about a $62,000 a year reduction in their energy costs.

“It’s helping to take the volatility out of the farm’s future electricity contracts, which is becoming an increasing risk for many Australian businesses – particularly energy intensive operations driven by heating and cooling.”

The Goulburn Valley has been a focal point for large-scale solar development in Victoria in recent years, with a number of projects in the development pipeline, or seeking approval for construction in the sunny farming region.

Most recently, a 30MW project was approved for development in the town of Congupna, alongside the release of state government guidelines to help councils, developers and communities negotiate the boom in large-scale solar proposals.

The Congupna solar project was approved by the state Labor government late last year, six months after being “called in” by the planning minister alongside three other solar farms proposed for the same area, governed by the Greater Shepparton Council.

As we reported at the time, the proposed projects – including Tallygaroopna (68MW), Lemnos (100MW) and Tatura East (45MW) – had divided the community, particularly around the associated loss of prime agricultural land, and over concerns about mingling fruit farms with solar farms.

A December 2017 report in the local Weekly Times said some farmers in the Valley had grown concerned that large banks of solar panels would act as “massive heat sinks” and spoil their crops.

Their concern appeared to be based on an article published in the science journal Nature, that reported solar industrial developments acted as heat banks, raising surrounding temperatures by 3-4C°.

The Rachele family, meanwhile, appears to have found a happy medium with its own, smaller-scale solution.

Verdia says it will continue to monitor the performance of the two solar systems, with regular dashboard reporting showing energy production and cost reductions.