Welcome once again to our ASM Money business newsletter.

May! What a month it was, we started off the month with a very successful couple of days at the “Australian Solar Council, Solar Energy Exhibition & Conference” where we had the opportunity to meet and greet with hundreds of industry professionals and specialists like yourself.

Our company CEO Greg Ferrett had a fantastic talk and presentation on day one of the Conference, and demand for his narrative has been quite high since then, Have you requested a copy of his talk yet?

We started the month still celebrating news from research firm GTM that after the dismal past 3 years we have had in the solar industry, this year’s 2017 global PV demand forecast is as high as 85GW and double the amount installed in 2014.

GTM Research has forecast that by the end of 2017, India will have overtaken Japan to become the third largest PV end-market, and with the moves seen in Australia over the last month, it is nice to think of what the future holds for us as well.

After facing months of ongoing protests in QLD and around the country, Banking Giant Westpac, released a new Climate Change Action Plan, and in the process ruled itself out of ever financing Indian conglomerate Adani’s controversial mine in the Galilee Basin. Other strategies to tackle climate change in Westpac’s action plan include an A$10 billion target for lending to climate change solutions by 2020, also pledging to reduce the bank’s own carbon emissions, and improving how the bank reports on its climate change performance.

Also at the start of the month, ARENA unveiled its four main investment priorities with a focus on Battery Storage, Grid Stability and Reliability, Solar PV Innovation and Energy Productivity.
“We think we can have most impact in these four areas. This is where we are concentrating our efforts,” ARENA CEO Ivor Frischknecht said, furthermore ARENA is confident that Solar PV could provide 30% of Australia’s electricity needs by 2030.

These were quickly followed by Rob Koh of Morgan Stanley’s, who said his company expected battery storage installation to hit 1 million by 2020 behind the meter, and this is not expected to stop there, as High gas and Coal prices continue disrupting the costs of generation and therefor pricing on the NEM.

Then according to figures released by Industry Statician Sunwiz, Australia installed another 71MW of small scale rooftop solar, bringing the total installed for the first four months of 2017 to 301MW. Queensland continued to lead the way with 18MW of roof top solar installations, followed by NSW, Victoria and Western Australia with 13MW.

On may 10 we were greeted by a federal budget which had nothing to offer the renewable energy industry on the surface. Some money has been allocated to some projects approximately $265million but we must still wait on the Finkel Review to know just how serious the Federal Government really is in meeting the obligations laid out in the Paris Climate Accord.

Good thing the states are making decision to go it alone when it comes to climate change, while leadership is lacking from Canberra.

On the same day that we received news of the budget, we also found out that another massive player in the industry was filing for insolvency, SolarWorld one of the few original German companies to survive the demands at the turn of the decade, couldn’t sustain the massive onslaught of lower pricing to the OV market brought on by lower manufacturing costs from China. We have since then also found out, that the SolarWorld holdings form the USA, have also had to file for insolvency as the situation has worsen for the company. Fair Well SolarWorld. Half way through the month we found out that an entire island had gone solar, with the island of Ta‘ū in American Samoa taking in the benefits of a 1.4 megawatt microgrid that generates power for 100% of the island and stores 6 megawatt hours of battery power from 60 Tesla Powerpacks.
The microgrid has replaced diesel generators and therefore removing the risk of power intermittency and making outages a thing of the past. It is this type of application to large projects that is opening the doors to a wider range of solutions right here at home.

By around the same time that Tesla Announced it was taking orders for its solar roof, the University of Newcastle was able to launch Australia’s first large-scale demonstration of printed solar panels, as part of the final phase of testing of the ground-breaking renewable energy technology. “No other renewable energy solution can be manufactured as quickly. On our lab-scale printer we can easily produce hundreds of metres of material per day, on a commercial-scale printer this would increase to kilometres. If you had just ten of these printers operating around the clock we could print enough material to deliver power to 1000 homes per day,” said Professor Dastoor.

Another bit of good news was a report on an analysis of the big electricity price surges during the February heatwave in NSW, this report suggests that without rooftop solar on the homes and businesses across the state, the market price of wholesale electricity would have been higher by nearly $1 billion dollars over the three heaviest days of the heatwave.
Rooftop solar PV supplied only about 2 per cent of the state’s total power needs over that time – or about 17GWh – but its impact on the market was to cut the price of electricity by 60 per cent, delivering savings of $888 million. 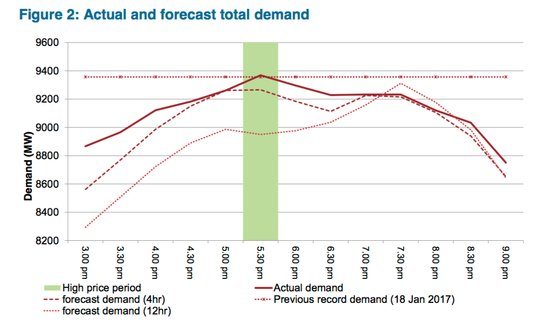 Meanwhile in QLD, Coal plants failed on the day of record demand from the heatwave, leading us to ask, if Australia’s coal and gas generators were fit for purpose to power us through Next Summer’s Heatwaves?
A report from the AER looked at the soaring electricity prices on Feb 12 2017 when the heat across the state caused record demand despite the day being a Sunday when most business and manufacturing was closed, based on the report, the main reason for the price increase was the sudden withdrawal of more than 790MW of coal and gas capacity, all due to technical faults related to the heatwave.

By May 18 we were all reading about the 40MW Floating PV Power plant in China that had been grid connected and was now the largest operational floating farm in the world. According to Sungrow who commissioned the plant, the floating plant is located on flooded land with the depth of water ranging from 4 to 10 meters, according to the company. 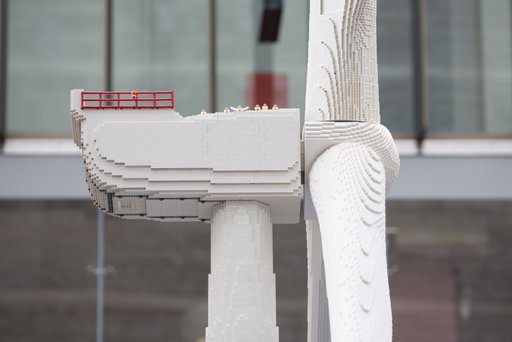 Then for the parents and geeks in us, our favourite toymaker the LEGO Group, announced that it had reached its 100% renewable energy target a whole three years ahead of its projected schedule, thanks to the completion of its 258 megawatt Offshore Wind Farm.

The Burbo Bank Extension Offshore Wind Farm is the result of several years’ worth of work between joint venture partners lead by parent company of the LEGO Group.

Also in May, the CEC released its policy paper, Charging Forward: Policy and regulatory reforms to unlock the potential of energy storage in Australia, which outlines a package of targeted reforms to support the increased roll out of energy storage for grid scale projects.
The policy paper recommends 13 reforms across four categories to achieve this, ranging from removing regulatory barriers and rewarding the value of storage behind the meter, to protecting consumers and changes that would allow storage to support grid security through its fast frequency response capability.

Then on the home stretch to the end of the month we had another report, this time by the International Renewable Energy Agency, which showed a large increase in the number of people employed in the renewable energy industry.
The report has revealed that a total of 9.8 million people worldwide currently works in the renewable energy sector, with Solar PV being the largest employer boasting 3.1 million jobs around the world. “Falling costs and enabling policies have steadily driven up investment and employment in renewable energy worldwide since IRENA’s first annual assessment in 2012, when just over seven million people were working in the sector,” said Amin. 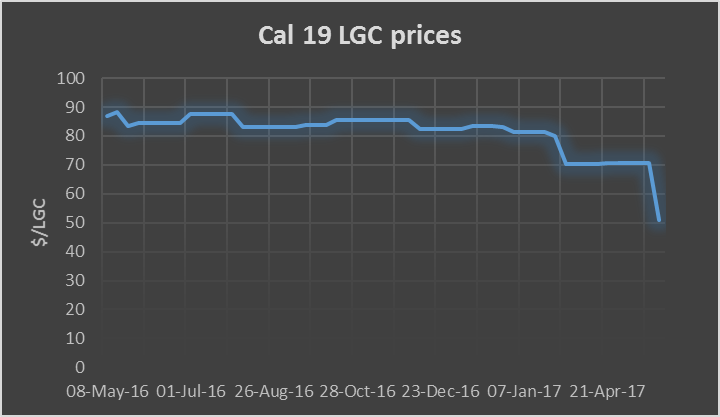 By May 29 the RET was been talked about in regards to the value of the LGC market price, which seemed to be in a free fall. According to Mercari, the source of our week LGC price data, FY19 futures fell 27% in just one week to $52 from the prior week’s $70.
The Clean Energy Regulator earlier in the month stated that around 4GW of new projects in FY17 and FY18 were required to meet the target.

However it is a very real argument to be made, that the target will be met, and quite possibly could be exceeded, it would be good by now to contemplate what will happen to the price of certificates if the target is exceeded?

This is a space we will all be keeping a close eye on, and hope that the government has the foresight to put in place the right framework, based on whatever the upcoming Finkel report has to say on the subject.

Then closing out the month of May, our favourite Australian communications company Telstra, signed on to build a 70MW solar farm in North QLD, in what is a move to cut energy costs to the company, and it’s the first part of the long awaited rollout of the Telstra Energy Strategy.
The deal was unveiled Ben Burge from Powershop who now heads Telstra’s Energy Division. “We are proud to be taking an active role in Australia’s transition to a lower emissions economy, complementing our long-standing energy efficiency and sustainability programs that saw our emissions intensity per unit of data fall by 56 per cent over three years,” Burge.

“The Emerald project is part of Telstra becoming a more active participant in the energy market to reduce costs while at the same time building resilience in our network and contributing to a more stable energy system.”

With the uptake of new renewable technologies as well as the improvements on storage systems and a drop-in pricing of these, the industry is now experiencing a boom across domestic and commercial solar in Australia. If we can be of assistance to you and your business in your renewable, financing or lending needs, call the ASM manager in your State or our friendly Admin team on 1300 080 163